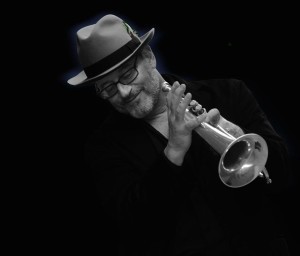 His boundary bursting, accolade filled career reached a dynamic peak in 2017-18 as a member of FLOW, a dynamic ensemble (featuring genre greats Fiona Joy, Lawrence Blatt and legendary Windham Hill founder and guitarist Will Ackerman) whose self-titled collection hit the Top 5 on the Billboard New Age Albums chart and won Album of the Year at the ZMR Awards and Best New Age album at the Independent Music Awards. For the inventive trumpeter and flugelhornist, there was only one way to follow up on this success – Reach!

For Oster and his chief collaborator/album producer Ruslan Sirota (who also plays piano, keyboards, guitar and provides vocals), the title Reach doubles as a powerful mission statement. It means breaking from Oster’s past tried and true studio approach of the past and engaging in a deeper exploration of the horn player’s artistry. Over the course of nine tracks, the result is a transcendent chill/ambient/new age meets sensual and grooving jazz/world fusion vibe where truly and radically, there are no creative boundaries. The first single from Reach is “Troppo Y Boffo,” a densely percussive Jobim-inspired dance jam filled with the spirit of Rio.

Although the album was primarily recorded with Los Angeles based musicians at Stagg Street Studio and The People’s Recording studio, fans of Oster’s previous Ackerman-produced albums – including Released (2005), True (2007) and Next (2015) – will note an important through-line. Reach was mastered by Tom Eaton at Ackerman’s famed Imaginary Road Studios, where Oster has also worked on countless sessions for other new age artists.

“The title of every album I’ve recorded is like a single word snapshot of where I am at in my life,” Oster says. “Released is obviously about me finally releasing a full set of my music out into the world. When I released True, I was going through all sorts of changes in my life where the roles I played didn’t always feel authentic to me. The only thing that was true was my music and horn playing. I’ve often said that my truth comes out unimpeded by words.

“Surrender was during a time after my divorce, when I was letting go and starting over,” he adds. “Then once the dust settled, it was like, ‘What’s Next?’ Reach finds me heading into the rest of my life, with my daughter leaving the nest for college. I’m not sure where things are going personally and musically – but I visualize it going like a rotary traffic circle, where there are any number of exits.”

That freewheeling spirit, being so beautifully connected to the unexpected, flows through every track on Reach. With previous albums, Oster would make elaborate home demos, creating lead horn melodies and counterpoint harmonies over loops and tracks and bringing those into the studio where he hired what he calls a “musical fantasy camp” of studio musicians to help him realize his vision – including, over the years, all-stars like T-Bone Wolk, Keith Carlock, Chuck Rainey and Bernard Purdie. These recordings helped establish Oster as a major force in new age music, and have made him a four time ZMR Album of the Year winner, with numerous #1’s on NPR’s influential “Echoes” program and two wins for Best New Age Song at the Independent Music Awards.

Reach, on the other hand, is pure serendipity and spontaneity in action. Oster met Sirota online when the Grammy winning, Ukranian born musician – a longtime member of The Stanley Clarke Band whose credits include Josh Groban, Seal and Chick Corea – launched a Kickstarter campaign for a new project. One of Sirota’s offerings for contributors was that he would write a song for a $300 donation. Oster bit, Sirota penned a tune and from their mutual admiration of the other’s styles, the two launched a unique partnership. Sirota suggested the two collaborate on an album, and Oster knew from the get-go that it would be much more organic than anything he had ever done.

There was creative incentive for both to move past their creative comfort zone. Ruslan was eager to get some of his L.A. session pals involved, but before that, he and Oster sought the right inspiration for the project. They did a Skype listening session, sifting through the hippest and trippiest ambient/downtempo chill music, including artists featured on the Groove Salad outlet on Soma FM. The idea was to choose a playlist and try to capture the feeling of those tracks in studio jam sessions – and have Oster add his horn melodies later. Over the course of eight hours, the crew of Robyn Gosh (guitar), Benjamin J. Shepherd (bass), Tamir Barzilay (drums), Pete Korpela (percussion), Jenni Asher (erhu), Ravichandra Kulur (Indian Flutes) and Drew Allsbrook (vocals) vibed under Sirota’s direction. He would talk to the musicians and often play keyboards as they were playing, calling out changes to keep up the flow.

Over the next few months, Sirota mixed and tightened the tracks. The two got together in the studio and let those tracks role so Oster could spontaneously blow his trumpet and flugelhorn magic over them, creating a wild sense of musical dynamics while weaving intricate harmonies in with the melodies of each track. Then Sirota comped together the band’s mixed tracks and Oster’s tracks, taking the best part of each performance and editing them into song form.

The combination of Oster’s deeply felt melodies, eclectic grooves and exotic textures make Reach a true improvisational triumph more in the spirit of jazz fusion than Oster’s normal genre. Considering the album’s organic origins and wide-ranging styles, the collection holds together thematically because of the great detail Oster brought to the project after the music was completed. From the echoing Native American percussion at the start of “Onward” through the gloriously inviting Indian Flutes driving the journey to “The Pink City” of Jaipur, India, Oster takes the listener on a joyous journey. Stops along the way include “The Rockaway” (named for the last stop of the “A” train in New York), “Le Caveau” (named for Paris’ cave-like free-jazz club Le Caveau de la Huchette), “The Lotus Within” (an introspective meditation named for The Lotus Temple in New Delhi, India) and “Five Great Mountains,” whose summits were visited by the great sovereigns of Ancient China.

“There is something truly liberating about Reach,” says Oster. “As the title implies, I may not know where my life’s next destination is, but I do know there’s beauty in reaching for something I’ve never done musically to capture the essence of a live performance. I have always sounded much different onstage than in my recorded music, and working with Ruslan and his incredible musicians opened me up to exploring fresh territory. I’m classically trained, and the charts I usually write for my trumpet and flugelhorn leads are very structured. So literally taking this one track at a time, thriving in the spirit of spontaneity of building from the ground up, then whittling everything down into viable songs, was a very fulfilling experience.”